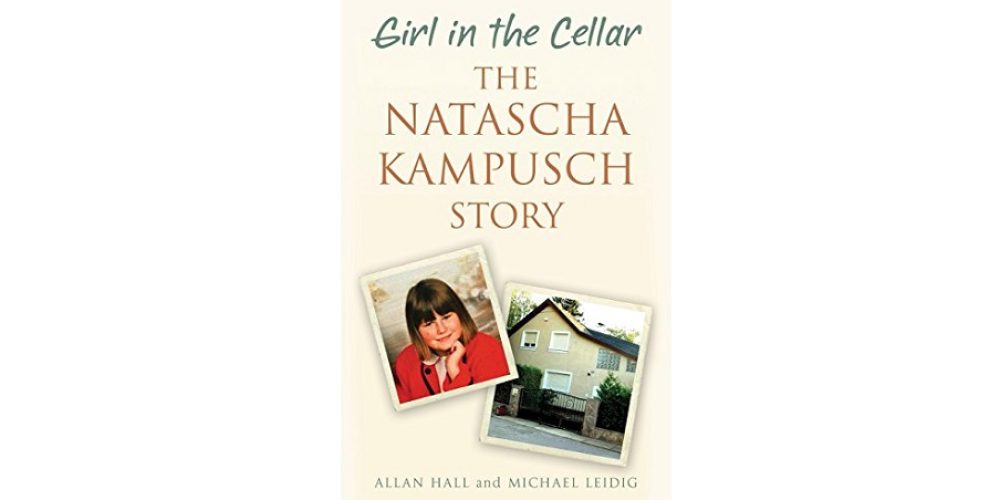 „When Natascha Kampusch escaped from the cellar dungeon where she’d been imprisoned for eight years, the whole world was shocked by her horrific ordeal. Full of exclusive revelations, GIRL IN THE CELLAR is the first book to investigate what really went on and how Natascha survived it.“

[…]  The Kurier Newspaper introduced a new factor into the investigation when it hired the private detective Walter Poechhacker, a move that instantly put him at odds with the SB, who saw it as a public insult that they hat hired a single man to do the work of their agency. After he had investigated it for a week, the newspaper paid him off but, convinced there was more to be found, he then carried on working on the case for free, and asked for his newspaper fee to be paid to the St Anna Children’s Hospital in Vienna. Poechhacker told the autors:

I had worked on nine missing children cases, and this was my thenth. I had solved all the other nine, and as soon as I started looking at it I was convinced that someone within the familie or the community was involved. It just doesn’t happen that a child can vanish so completely and effectively if a complete stranger is involved. Such a clean disappearance only comes with careful planning and with someone who knows what and who they are looking for.

He admits that initially he suspected the father, but after talking to friends he soon realised there had been a strong bond of love between the two. Numerous people told him how happy Natascha had been with her father, and how much she enjoyed her time with him.

In a newspaper article, Poechhacker wrote: ´All the evidence points to a kidnapping, that the answer to this case lies in the immediate environment of Natascha. If all those concerned were tested with a polygraph or lie-detector test, then the answer would quickly become clear.`

Convinced that a lie-detector test might settle the case and prove his theory that a member of the family was involved, Poechhacker invited a German professor to Vienna to test five principal suspects, including the mother and father. The 5,000 pound cost of the tests he paid out of his own money. But the procedure did not go as well as he had hoped: ´The professor, who was 81 years old, was late getting here, and could only interview three candidates. The other two candidates had to be interviewed the next day.‘

But he was particularly unhappy that it was not the professor but an assistant who had questioned the mother. He later learned that, in any case, the scientist’s work was discredited after he gave evidence that helped get a US soldier stationed in Germany convicted for murdering his wife, only for the real murderer to be found a month later. ´It was really a shame that we had him and not someone else. Who knows what might have been uncovered at this point?`

Nonetheless, Poechhacker believes the exercise was not completely flawed. He claims that it revealed that there was one person connected to the family who was clearly guilty of something. He said: ´One Person who was tested was in a nervous state the like of which I have never before witnessed. That person smoked non-stop, their hands shook, and when I looked into their eyes we both knew what the other was thinking. I thought we were going to get a confession at that point.` He refused to say who that person was.

After the tests were carried out Poechhacker had offered to give the results and the interview tapes to the police, but claims there was little of interest in them. The original lie-detector tests were carried out on 19 December 1998, and the tapes in fact remained with the detective until 28 February 2001, when he offered them again and the Natascha task force finally accepted them. In a book he wrote on the case, Poechhacker states that he believes that the mother`s lovers and associates were not properly investigated by the police.

In television and newspaper appearances she [Frau Sirny] made an impressive figure, in contrast to Herr Koch, who seemed somewhat helpless and lost for words. She had a Madonna statue in her flat that was always in the background as she spoke about her daughter. There was a photo of Natascha next to it. She would explain to people who said she seemed cold that she merely seemed tough, and reserved her tears for the privacy of her own four walls.

One question that has not been properly answered remains: how strong were the connections between Frau Sirny, her married lovers including Ronnie Husek, and Wolfgang Priklopil, who all drank in the same bar over the years?

The detective Poechhacker was convinced throughout his work on the case that police were trying to deflect him from investigating Natascha`s mother and the men around her. He wrote in his book that he got the impression that there was „pressure from above“ for detectives `not to investigate in this direction`.

He says in his book that he stated quite clearly to police that it was his impression that all lines of inquiry relating to Brigitta Sirny were being closed down. He added that Max Edelbacher, chief of the SB from 1988 to 2002, when it was scrapped and he was demoted, had admitted in a telephone conversation that there was `resistance` in the Natascha task force to investatigating Frau Sirny`s connections, but he alone was unable to change it.

`I sympathise with him`, said Poechhacker, `but I do not understand why, if he is head of the SB, he didn’t simply just say to them, do it. I believe by this point there were already orders from above telling them to cover their mistakes by hook or by crook.`

At one point Poechhacker wrote to the Austrian Home Office to complain about the lack of progress and enthusiasm in the Natascha case, but nothing was done. He also suggested that senior detectives who were part of the investigation might not have been too keen to have a scandal erupting as they climbed the promotional ladder. In particular he named Edelbacher and Geiger, who at one time were both short-listed to head the new èlite police force formed from the disbaned rump of the SB.

Geiger, 51, was head of the Homicide Commission of the Vienna SB from 1991 until 2002, and then became head of the Criminal Police Department. In 2005 he was decorated with a silver medal for merits in serving the country, but early in 2006 he was given a suspended three-month sentence for tipping off pimps about impending police raids on their illegal brothels. […]